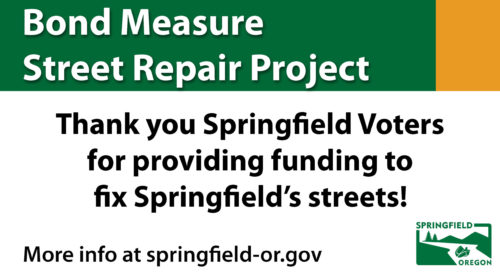 The City has published its Street Repair Bond Measure 2019 Annual Report online describing the first year’s activities and results. In November 2018, Springfield voters approved a five-year $10 million general obligation bond to fund street repairs on a list of priority commercial streets in need of repair. As part of the Bond measure the City committed to Springfield taxpayers to provide an annual Bond Report describing project activity.

The City’s goal was to hit the ground running, and two smaller projects were designed and bid for construction before the first year of the Bond’s property tax levy was implemented. The first two projects included portions of 14th Street and Commercial Avenue. In 2019, the City also began design work for the second round of street repair to be bid and constructed in 2020. The streets included in the second of repairs are portions of Olympic Street, Centennial Boulevard, 42nd Street, and Mohawk Boulevard.