In 1976 Federal Grant money was available to Law Enforcement agencies in the State of Oregon for burglary prevention or detection. The Coos Bay police department used this grant money to start a K-9 program, and while attending a seminar in Coos Bay, Sergeant Alan Carlson observed the dogs work. Sgt. Carlson became interested in the K-9 program and believed that dogs were useful tools for law enforcement. He initiated a study and proposal for the Springfield Police Department on K-9’s which was supported by the police administration, but was not submitted to the City Council for review for several years.

In 1981, after continuous years of submitting the proposal, a new City Manager allowed the City Council to review the report.  Thus, the K9 Unit was formed.

Because of his efforts and interest, Sergeant Carlson was sent to a two-month school at Mandelyn Kennels in Bakersfield, California to learn dog training. Later, Sergeant P.T. Roberts and he attended a three-week police K-9 handler school. The first two dogs, Arras & Jasko, were Schutzhund titled German Shepherds imported from Germany. Schutzhund is a dog sport in Germany, which requires passing scores in tracking, obedience, and protection. These training disciplines are essential working abilities for a police service dog. The program proved successful and in 1984 expanded to a four-dog program to insure the adequate coverage of the Night and Morning shifts and reduce overtime because of requests for K-9 assistance.

The Springfield K-9 Trainer tests each dog at the vendor’s kennel prior to acceptance and training to establish if the dog possesses the necessary instincts and drives to complete a police service dog training course and meet the high standards of the Springfield Police Department. Training is certified by the Department of Public Safety Standards and Training and is conducted by a qualified instructor in the K-9 Unit.

Springfield Police Department K-9 Unit has established itself as one of the premier units in the State of Oregon.  In addition to training Springfield Police dogs the K9 Unit assists in the training of dog teams from around the state. With a continuing emphasis on obtaining quality handlers and dogs, combined with up-to-date training, the proficiency of Police Service Dog deployment in Springfield remains successful and professional as we enter our forth decade of service. 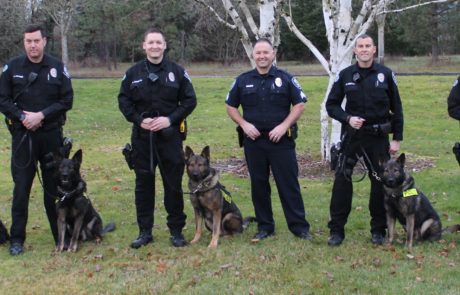