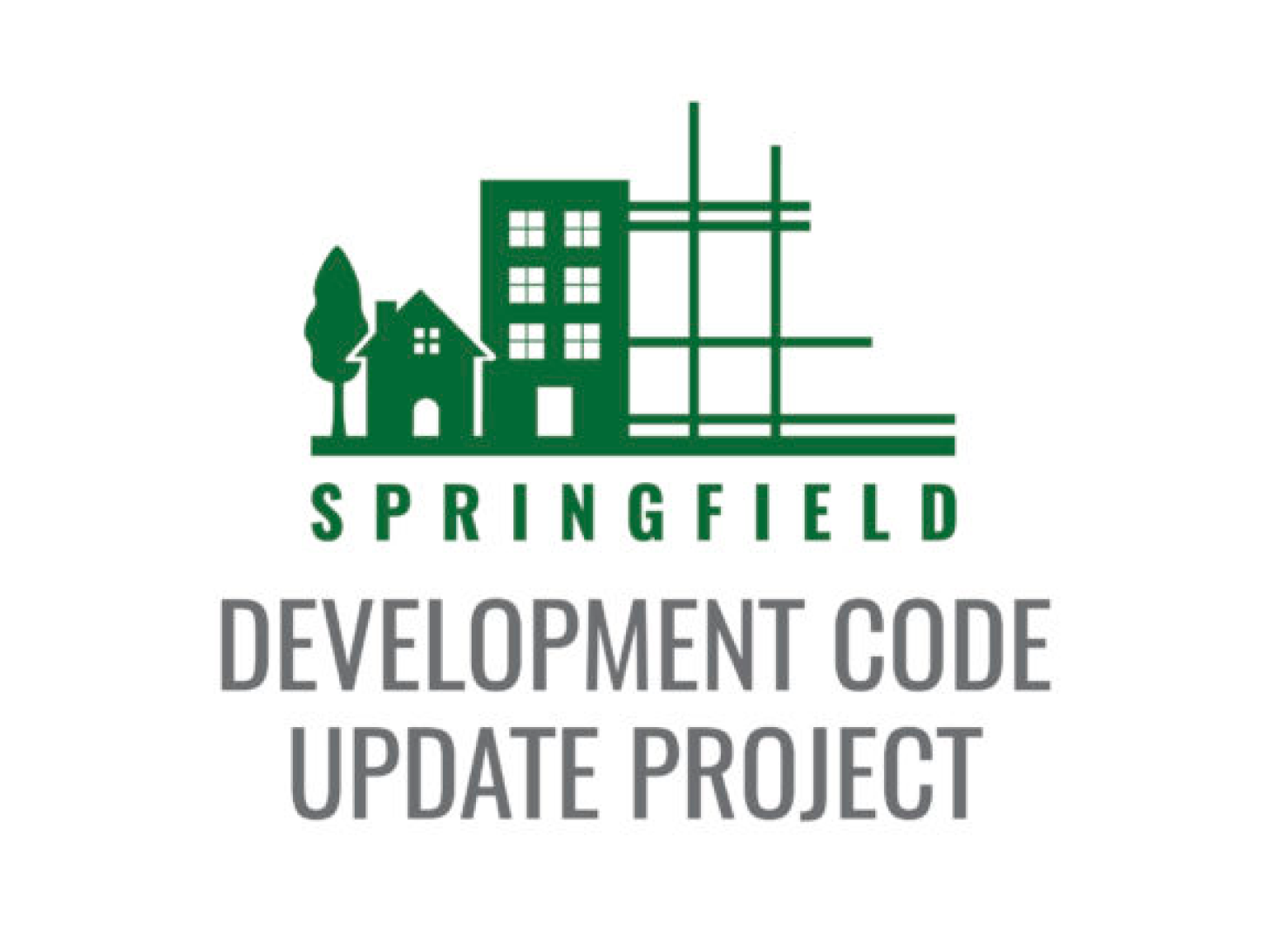 The community engagement for the Development Code Update Project has been launched.  A virtual open house is the primary way community input is being sought. You can help us make sure that the significant changes proposed to the Springfield Development Code are easy to understand, more streamlined, and support development. Please visit the virtual open house here, and then take the survey to provide input on Phase 1 – Housing and Phase 2 – Employment Lands of the project. You can also access both by clicking on the buttons below.

Need more information or have questions? Check out these updated fact sheets, FAQs and the additional information below.

Fact Sheet #1 – Fact sheet about Phase 1 of the Development Code Update project that is focused on Middle Housing.

Fact Sheet #2 – Fact sheet about the Middle Housing Legislation Oregon House Bill 2001 including background, and what the City can and cannot do related to its implementation.

The Springfield Development Code is the principle document that implements local, state, and federal land use, transportation, and environmental laws applicable in the City of Springfield. The current Development Code was adopted in 1987. Other than a general “housekeeping” update that occurred from 1998 to 2005, the Code has been revised only to comply with state or federal laws, or as directed by the City Council in response to a specific issue or objective. The Springfield City Council recognizes that the Springfield Development Code is difficult to use, understand, and implement. Resolving the complexities and outdated nature of the code will help achieve the economic and housing goals for our community. The Council has directed staff to complete a full Development Code Update which started in 2019 and is anticipated to conclude by the end of 2023.

Back in February 2020 the City released three draft updated code sections for public review at the direction of the Springfield City Council for the Phase 1, Housing/Residential of the Development Code Update Project. Since that time many things have changed, and a lot has been going on.

The State of Oregon passed new legislation, House Bill 2001 (HB 2001), in 2019 that requires among other things for the City to allow Middle Housing on residentially zoned lots and parcels that allow development of single-family homes. Middle Housing is defined as duplexes, triplexes, fourplexes, townhomes, and cottage clusters.

City staff participated on multiple State committees to help inform the Department of Land Conservation and Development (DLCD) in writing the Oregon Administrative Rules (OAR’s, or rules) that will implement the new legislation. In discussing the implementation of HB 2001 with Springfield City Council, it was decided to move forward with the housing code updates, including trying to fully implement the new HB 2001 provisions, ahead of the rules from the state being finalized. As the rule making process continued at the state level it became clear that the draft code sections that were released for public review and comment needed to be revised to incorporate rule language that was not anticipated.

On June 22, 2020 the City Council was given an update on the project. After discussion and consideration the Council gave direction to staff to not proceed with additional public outreach efforts in anticipation of having to make changes to the draft code, wait for the state rules, and then reengage with the public after the final rules are clearer. Listen to meeting recording to learn more. Please note it can take several minutes to open this mp4 file.

The state finalized the rule making process on December 9, 2020. The final rules can be found at the state webpages linked below.

Along with proceeding with Phase 1 for housing as discussed above we are continuing to work on Phase 2 of the project to update the code related to employment lands (commercial/industrial). The City of Springfield Planning Commission, acting in their capacity as the Committee for Citizens Involvement (CCI) appointed nine members to the Technical Advisory Committee (TAC) for this phase of the project.

The established project purpose and objectives were developed in conjunction with the Springfield City Council and Planning Commission and approved as part of the Community Engagement Plan for the project.

The Project objectives are to:

When complete, the updated Development Code should:

KLCC’s Oregon Grapevine: Housing in Springfield
Barbara Dellenback with KLCC speaks with Springfield Interim Planning Manager Sandy Belson about housing solutions. They discuss the rising cost of housing, legislation aimed at creative affordable housing, and efforts to make sure everyone has shelter. Listen here or go to https://www.klcc.org/post/oregon-grapevine-housing-springfield.